The commission, whose purposes is to consider initiatives to go on the 2018 ballot, held nine public hearings earlier this year. The hearings gave citizens an opportunity to provide direct input to the commission on various issues, and as the new head of Florida Fair and Open Primaries, I coordinated with the national organization Open Primaries in order to turn scores of citizens speaking out in support of an open primary system for Florida.

According to the Florida Division of Election’s website, over 3.6 million voters are registered with no party affiliation. That’s over a quarter of the electorate, and we’re barred from voting in primary elections. Due to past gerrymandering, safe districts still exist for both parties, and the majority of races are actually determined in the primary; not the general election.

Language adopted twenty years ago by the previous commission, and approved by voters, allows everyone to vote in a primary when the winner of a primary will be unopposed in a general election. However, the law is being circumvented by parties inserting bogus write-in candidates. In so doing, they close the primary to all others. While we support closing the write-in loophole, we take it a step further.

We want all candidates, regardless of party affiliation, to appear on a single primary ballot with all voters voting for their preferred candidates. The top two vote-getters would then advance to the general election. A poll we cosponsored in March 2017 shows 73% of voters want the CRC to put it on the 2018 ballot.

We not only believe this is necessary to give all voters equal access, we believe it will force candidates to appeal to a broader base. This in turn will result in less partisanship and better policy.

Listen to Jackie Bowen address the CRC in Jacksonville.

Six days later, the General Provisions Committee voted unanimously to kill the proposal at its first hearing. We feel strongly that supporters did not get a fair hearing. Watch and form your own opinion.

The CRC has wrapped up its work without advancing any proposal addressing our "rigged" closed primary system, but we will continue our efforts to open Florida's primaries to all non-affiliated voters. 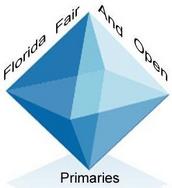 As this is currently a grassroots effort, we need volunteers in various capacities. If you want to be more involved in the movement for open primaries in Florida, please contact us here.