Which races would be affected by the amendment?

o State elective offices are currently the only races affected by the All Voters Vote proposed amendment.

How many states have a top two open primary?

o In some instances, yes. While there are other reasons why this might happen (eg. too many candidates of a major party split the primary votes), the main reason would be due to a major party's traditional dominance in a district. In these cases, candidates are forced to appeal to independents as well as members of other parties. Currently, 80-90% of elections are decided in the primary; not the general election.

​          Although the dynamics change from one election cycle to the next, an open primary provides the best opportunity to advance candidates most acceptable to the largest number of voters. What good does it do to have a candidate from an opposing party on the general election ballot when he/she has no realistic chance of winning?

o A primary including all candidates provides more attention to minor party candidates.
o Minor parties have an opportunity to build coalition voting blocks in an open primary.

Why not pursue a ranked choice voting method which is deemed superior by many?

o Florida currently has not certified any ranked choice voting software. The city of Sarasota passed a local measure for ranked choice voting in 2007. It purchased new software in 2015, but has yet to obtain state certification. Additionally, the cost of implementing the system statewide could present another obstacle for gaining voter approval. However, we do support ranked choice voting, and support its use most strongly on the local level, and on the state and federal level in a general election where candidates are decided in a top four or five open primary. This is an excellent resource for more information.

o Go To Our  "Contact Us"  Page And Submit Your Request and sign up to receive updates via email here.


How Do Primaries Work? 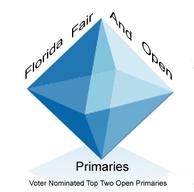